Talking with Young Children about the Death of a Pet

Talking with Young Children about the Death of a Pet 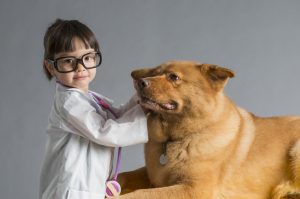 “It’s precisely because children don’t understand what death is about
that they need help from loving adults in talking about it.”

In one of his 1970s children’s television episodes, Mr. Rogers gives a beautiful example of how to talk with young children about death. He looks into the fish tank and says, “Oh, what’s that right down there? Do you see a dead fish? A dead fish would be one that isn’t swimming, isn’t breathing, or anything at all.” He continues matter-of-factly, “I guess we’d better bury it.” He gets his trowel, digs a hole in the yard, and buries the fish.

Afterwards, Mr. Rogers recounts his sadness when his childhood dog Mitzy died. He shows us her picture and explains that he didn’t want his father to bury Mitzy. “I thought I’d just pretend that she was still alive.” In his quintessential style, Mr. Rogers speaks slowly and honestly, pausing frequently to allow time for children to take in and consider his words.

Many children become curious when they are first exposed to death—with a dead bug or dead animal on the road, for example. Developmentally, children can’t fully conceptualize death until ages10–12, but we can help them begin to learn about it. Let yourself be guided by your children’s questions, answering only what is asked. Children often repeat the same question in order to hear the information again, not because they want more elaborate explanations. Most importantly, be honest. Research in developmental psychology shows that children manage better when they’re given truthful explanations about death.

The Loss of a Pet

Pets are an important part of many families, a source of joy and unconditional love. Children’s reactions to the death of a pet are varied and may be quite different from your reaction. Listen to and acknowledge your child’s feelings and needs. It’s fine to share your emotions. If your grief is intense, gather yourself before speaking to your children, to prevent burdening them with overwhelming feelings. Be literal and avoid confusing euphemisms. Telling children that your pet was “put to sleep,” for example, may cause concern about what happens when humans fall asleep.

Find a way to say goodbye to your pet. Many families and Montessori classrooms have a ritual when an animal dies. A small animal, such as a turtle, bird, or fish can be placed inside a decorated box, then buried in the yard.

Children often enjoy drawing a picture of the departed pet and writing (or dictating) a sentence about that animal. When Hammie the hamster died, my nieces and nephews organized a funeral, complete with flowers, speeches, and a song. Each child contributed to a booklet detailing memories of their pet. “I loved when Hammie crawled down my shirt and tickled me,” my six-year-old nephew recounted.

The death of a pet provides opportunities to tell children about your personal or spiritual beliefs about death. Older children are often fascinated to learn that other religions and cultures have beliefs about death that are different from their own. Death is part of the cycle of life, and yet much about death remains unknown. It’s okay not to have all the answers. It’s always appropriate to respond to a child with, “I wonder about that, too.”

Many years ago as a young Montessori teacher, I was reminded of this very lesson—not having all the answers. One day I told the three to six-year-olds a story about my first cat. “When I was a child, I found a black-and-white kitten in a snowstorm and took her home. We named her Sniffles because she had a cold from being out in the snow. When I moved to San Francisco, I brought her with me. She loved to lie on the windowsill in my apartment, watching birds go by.

“One day,” I continued, suddenly realizing where my story was going, “I saw Sniffles in her usual spot on the windowsill, enjoying the sunshine. Then a few hours later I couldn’t find her. I looked everywhere. No Sniffles. I wondered if she had fallen out of the window. I ran downstairs hoping to find her on the sidewalk below, alive and unhurt. No Sniffles. I made signs with her photograph that said ‘REWARD! Lost Cat!’ and posted them on telephone poles. No Sniffles. Every day I went looking for her, calling, ‘Sniffles! Sniffles!’ But no Sniffles.”

I took a deep breath and decided I would tell the children the bare truth. I could not sugarcoat it. “I never found my cat. I was very sad. I cried because I loved and missed her. I don’t know what happened to her. Even to this day, I don’t know. What do you think happened?”

The children leaned forward, their eyes wide. One four-year-old boy raised his hand. “I think she went straight from your windowsill to heaven,” he declared, moving his arm to show the trajectory. We discussed other possibilities too. Perhaps my cat was adopted by a neighbor. Perhaps she got hit by a car and died. From that day forward, the children often said, “Tell us the story of your cat.” It was the only story they ever asked to hear again. I often wondered why. Was it the love in the story? Was it the mystery?

While talking with young children about death, there are a few important things to remember:

“Such short little lives our pets have to spend with us… It is amazing
how much love and laughter they bring into our lives and even how
much closer we become with each other because of them.”

— John Grogan, Marley and Me: Life and Love with the World’s Worst Dog

—by Irene Baker, MEd, Montessori Educational Consultant at Montessori Services. She holds both primary (ages 3-6) and elementary (ages 6-12) Montessori certifications and has taught at all three levels. For over 20 years, she has served as a Montessori consultant and teacher-trainer for primary and elementary levels, and has presented workshops for teachers at schools and AMS conferences. Her work with students and teachers is infused with her passions: storytelling, history, social justice, non-violent (compassionate) communication, poetry, meditation, music, and the natural world.